The following is a schedule of some of the projects in which key personnel of our team have taken a major role. In many cases the work has been carried out in the name of the firm or organisation where personnel were employed or contracted. Additional information regarding the projects or individuals extent of involvement will be provided on request.

The objective was to generate a strategic view of the service delivery requirements of the Hospital over the next 15 years and identify the physical implications required to meet the identified needs into the future.  The Consultancy included the preparation of a Master Plan and establish a planning framework for the efficient and effective achievement of the goals identified and included a response to the imminent relocation of The Children’s Hospital from the RBWH site to the Mater Hospital site.

Concept Planning and Design for the redevelopment of a Medium Secure Mental Health Unit on the site of the Townsville Hospital to meet a new Service Model for Medium Secure Units that had been prepared by Queensland Health.

The proposals include extensive modification of the existing buildings and an increase in floor area of around 50% to address a number of inadequacies in the original design of the facility. The upgrade was programmed for completion in early 2011 but is currently expected by mid 2013. 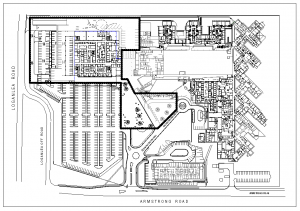 Garry Coff, supporting Woodhead Architects, developed the Master Plan for redevelopment of the Hospital, incorporating an upgrade of the Hospital’s Emergency Department as a first stage of work in a multi stage expansion of the Hospital from 35,000 m2 to around 100,000 m2 comprising increased inpatient accommodation from 352 to 991 beds by 2021.
The existing Hospital is mostly 2-storey and is unsuitable for vertical extension so the proposed solution involves a complete replacement of the Hospital on the existing ‘on-grade’ carpark at a total cost of $ 1.6 billion and the earliest completion date of 2016.

Garry Coff assisted Woodhead in the preparation of a Master Plan for development of the Hospital with a focus on increasing Ambulatory Care Services to meet the changing needs of the catchment community.

Garry Coff Consulting Services provided consulting Support in the Vamed Engineering (Malaysia) team bid for a new 300 bed Super Specialty Hospital near Kuantan. Garry prepared detailed schedules of accommodation for all areas of the new facility which was required to incorporate potential for expansion to 1200 beds.
Initially the Hospital comprised 12 Operating Theatres for inpatient care and 6 Day Surgery Operating Rooms plus 6 Endoscopy Investigation Rooms.
The total floor area of the initial stage was scheduled at 104,000 square metres.

Garry Coff Consulting Services was contracted to VAMED Healthcare Ltd in Beijing, China to provide Health Facility Planning advice and support and completed the preparation of Schedules of Accommodation and Concept Planning for a 1500 bed Public Hospital in the rural centre of Pizhou, South of Bejing. The new Hospital was to be constructed on the site of an existing Medical Centre that included Radiotherapy Services and some existing consulting services.

The new Hospital will include accommodation for visiting specialists and full Surgical Capability to support a range of high level specialties including Cardio-Thoracic Surgery. Construction was expected to commence mid 2008 with completion in late 2009 but construction has been delayed awaiting cost and contract  arrangements.

Garry Coff was commissioned as Health Facility Planner on the team headed by Hodgkison Architects to carry out an urgent conversion of vacated office accommodation at the front of the Mitsubishi manufacturing plant on South Road at Bedford Park to accommodate Bedford Medical Clinic.

The facility provided approx. 650 m2 nett. floor area and the 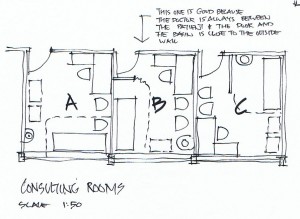 The project was accepted for documentation and construction at a cost of $1.6 million.  Construction was completed in late 2007.