Royal Brisbane and Women’s Hospital (RBWH) is a 1077-bed general, 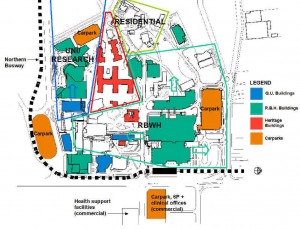 The objective was to generate a strategic view of the service delivery requirements of the Hospital over the next 15 years and identify the physical implications required to meet the identified needs into the future.  The Consultancy included the preparation of a planning framework for the efficient and effective achievement of the goals identified and included a response to the imminent relocation of The Children’s Hospital from the RBWH site to the Mater Hospital site. 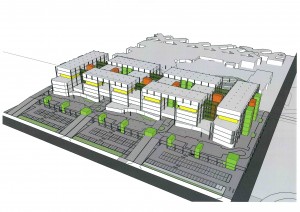 Garry Coff, supporting Woodhead Architects, developed the Master Planning and Schematic Design Phase of Redevelopment Proposals for the Logan Hospital, South of Brisbane. The planning incorporated an upgrade of the Hospital’s Emergency Department as a first Stage of work in a multi Stage expansion of the Hospital from 35,000 m2 to around 100,000 m2 comprising increased inpatient accommodation from 352 to 991 beds by 2021.

The project proposals needed to address projected growth in Services and Activity of almost 200% by 2021/2022 with works budgeted at approx. $1.6 billion with completion expected in 2016. The existing Hospital is mostly 2-storey and the foundation is unsuitable for vertical extension so the proposed  solution involves a complete replacement of the Hospital on the existing ‘on-grade’ carpark.

The Master Plan has to accommodate significant catch-up of workload that would need to occur as soon as the first stage of work was completed and also be in a position to maintain efficiency and safety whilst the second stage of work was under construction and the Hospital was spread across both old and new facilities.  This meant that the first and second stages would need to be almost self sufficient and that only non-urgent services could continue to function in the ‘old’ part of the facility.

The design was driven by the need to develop Master Planning solutions that would allow the upgraded Emergency Department needed in Stage 1 to be located in a position that would suit both the current workload and the projected role of the new facility.
Referees: Mr. Steven O’Connor

Garry Coff assisted Woodhead Architects in the preparation of a Master Plan for development of the Hospital with a focus on increasing Ambulatory Care Services to meet the changing needs of the catchment community.

Whilst employed by Woods Bagot, Garry assisted in the preparation of the Functional Design Brief and Master Planning Proposal for the redevelopment of the Hospital, which included the closure of lfould Street and the development of the entire site bounded by Wakefield, Flinders, Hutt and Daly Streets and incorporating the heritage listed School of Music facilities.
The first stage of the project which comprises Day Surgery Suite, Medical lmaging Services and Consulting suites was subsequently designed and documented by Woods Bagot and constructed at a cost of $ 10 million.

Amalgamation Project: As the core of the Woods Bagot Health Design team Garry was involved in the preparation of the Feasibility planning report for the now completed amalgamation of the Adelaide Children’s Hospital and The Queen Victoria Hospital. Garry Coff subsequently joined the South Australian Health Commission as Health Facilities Planner and represented the S A Health Commission at committee level during the Master Planning and design stages of the project.

Level 5 Redevelopment – Garry Coff Consulting Services and Lapsys Keam Architects, in conjunction with Services consultants, Lincoln Scott Australia, were jointly commissioned in May 1998 to conduct a planning study to examine options for development of Level 5.  The study objective was to meet the operational requirements of the existing departments  on the ‘hot floor’, and to establish a 20-bed Day Procedure area and a new High Dependency Unit adjacent to the redeveloped Intensive Care Unit. This required redesign of Level 5 including Nurseries, Inpatient Units, Department of Anaesthesia and Consultant accommodation and alterations to the Operating Suite and was budgeted to cost $ 15.3 million.

Garry’s role included the co-ordination of 16 User Groups to determine needs and to develop ‘signed off’ Functional Briefing documents and Concept layouts for each area  to provide the base for a Master Concept Plan for the proposal. This included the establishment of staging options for the proposed works.

Garry Coff Consulting Services was commissioned in February 2003 to conduct a review of Health and Aged Care facilities throughout the Region and to report on suitability for use, building condition and potential for future site and building development. The consultancy initially covered Ceduna District Health Services, Eastern Eyre Health & Aged Care Services (Cleve, Cowell & Kimba), and Mid West Health (Wudinna, Streaky Bay & Elliston) and was extended in 2004 to include Lower Eyre Health Services (Tumby Bay & Cummins).

Garry Coff has recently produced a Service Delivery Plan for the Health Service and has assisted Greenway International as Health Planner for upgrading of the Day Surgery, Delivery and inpatient areas of the facility.

We were also engaged to develop site concept planning proposals for future development of the site to meet predicted growth in the areas of ambulant care and Community Health support services and to address cxarparking shortages experienced as a result of unexpected growth in services since 2005.

Whilst employed by Woods Bagot as Principal Health Planner, Garry Coff carried out the preparation of briefing and Master Planning for the upgrading of facilities to meet the requirements of the hospital in its new role as a Multi-Purpose Service Health Centre. A major element of the planning process was the introduction of culturally appropriate facilities to meet the needs of both the European and Aboriginal sections of the Hospital Catchment Community.

The design included a number of elements that would allow flexible accommodation, able to meet the needs of both tribal and urban Aboriginal clients, and the introduction of safe areas outside the building for recovering patients and their families.
Following the establishment of his own practice in November, 1994 Garry continued on with this project to carry out design development and contract documentation. The developed design solution involved the refurbishment of previously under-utilized staff accommodation buildings as Nursing Home accommodation and reconfiguration of the existing Hospital Inpatient unit to improve efficiency and reduce operating costs. The facility was occupied in June 1997 with final costs of approximately $1.65 million.

Garry Coff Consulting Services was contracted to VAMED Healthcare Ltd in Beijing, China to provide Health Facility Planning advice and support and has recently completed the preparation of Schedules of Accommodation and Concept Planning for a 1500 bed Public Hospital in the rural centre of Pizhou, South of Beijing. The new Hospital will be constructed on the site of an existing Medical Centre that includes Radiotherapy Services and some existing consulting services.

The new Hospital will include accommodation for visiting specialists and full Surgical Capability to support a range of high level specialties including Cardio-Thoracic Surgery. Construction was expected to commence mid 2008 with completion planned for late 2009 but the project has been delayed awaiting the finalisation of funding and contract  arrangements.